Mangia has Moved!!!
I have relocated my blog site to Wordpress.  Please find me at Mangiawithmario.com
I look forward to hearing from you!
Posted by mangiawithmario at 4:56 PM 5 comments:


"It was wrong, but sometimes you have to break a few eggs in order to make an omelette." Stephen King

“An army marches on its stomach”-Napoleon Bonaparte


You can scramble them.  Fry them. Boil them. Poach them.  Bake them. Pickle them. Devil them. Salad them. Frittata them. Quiche them. Nog them. Curry them and even soup them. I’ve had them all. But one of my favorite ways to eat the versatile egg is the omelette.

Did you know? Every time you eat an omelette you are enjoying a dish that has traveled to us across time.  The first recorded omelette recipe is found in an ancient Roman collection of recipes called the Apicius. Some early ancestor of Julia Child was cracking a few eggs in the kitchen when she discovered that beating eggs, milk, and oil into a fluffy mixture could be folded over.  Apply honey and sprinkle pepper and you have the Roman omelet, ovemele. 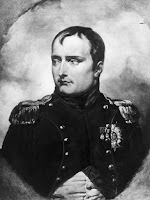 Of course the French have a thing to two to say about their part in the origin of the omelette. Some claim that the name is derived from amelette which translates as “blade” in French alluding to the shape of the dish. And according to legend, Napoleon Bonaparte was traveling with his army through a village in southern France when they stopped for the night.  A local innkeeper served a hungry Napoleon an omelette. His first. The Emperor was so impressed that he had all the eggs in the village gathered the next day to cook a huge omelette for his army. Now that’s supersizing on another level.

To this day on Easter Monday, a several-thousand-egg omelet is made in the same area. It is cooked in a massive pan over a huge fire. In fact, there are multiple locations around the world that host a Giant Omelette celebration. Collect a group of cooks and everyone gets to competing. In Portugal, Guinness World Records were on hand in 2012 to witness the cooking of a giant omelette that took 880 lbs. of oil, 220 lbs. of butter and 145,000 eggs. And yes, they were all free range.

Here’s a basic omelette recipe.  Any other recipe you’ll find is simply a variation of one type or another.  I’ll note some variations. 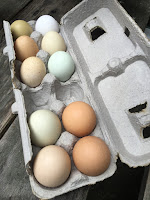 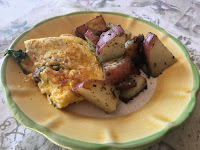 Crack your eggs into a bowl and add the cream.
Add salt and pepper.

Whisk until fluffy.
Heat butter in pan and pour in the eggs.
Pan tip as you go so that uncooked egg mix covers base
Use spatula to make small cuts into the egg
When it is nearly cooked place filling ingredients over half of the omelet. Turn of the burner. Fold your omelet over. Voila! 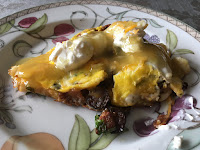 The marvelous thing about the omelet are the limitless possibilities that exist to fill them. This is what makes them so appealing to chef in every home. Each time my wife makes an omelet, it is an artistic creation driven by what she finds in the kitchen. And always appealing to the eye and palate. Remember to have your ingredients ready to go before cooking.

There you are, give it a go and let me know how it goes. With omelets, try anything and everything and try it often. You can’t go wrong. In ancient Rome there was an expression called, felix culpa. It means "happy fault" and was a reference to apparent mistakes that actually ends up having surprisingly great results.

So felix culpa and bon appetite!

Posted by mangiawithmario at 10:59 PM 3 comments: