Have you ever time traveled?

I have.
Sounds strange, doesn't it? But go figure.  There we were.  My wife and I were sitting in a horse drawn carriage riding down this city’s cobbled streets; passing homes and churches that have stood since before the American Revolution. Founded in 1670, some of this city’s citizens would go on to sign the Declaration of Independence.   This was where the first shots of the civil war took place and in this city, a black man named Barack Obama stood on a second floor balcony addressing a crowd, asking for their votes to become the next President of the United States.  They would. He did.

Welcome to Charleston, South Carolina.
But here’s another thing you need to know about this city.
The food is fantastic.
Charleston’s culinary heritage has been forged over time by the diverse influences of French, Caribbean, African and Anglo-Saxon dishes.
The result is a unique fusion genre called “Low Country Cuisine”.

So much fine dining to explore but alas, all we had was a week in Charleston.  But I didn’t let the time go to waste.
So here are a few of the highlights.

This restaurant is named after its address. If you are ever in this city and you only have time to try one dish.  Try the She Crab Soup and try it here. She Crab Soup is a Charleston signature dish and restaurants will offer their own version. 82 Queen’s version is a bisque made with blue crab meat, fish stock, crab roe, butter, shallots, heavy cream and their special seasonings. Garnish with a splash of sherry. Amazing!
And the Carolina Crab Cake. Fried blue crab patties with roasted garlic and lemon tartar. Unlike other places, the cakes here have less than 10% filler. Amazing all over again.
By the way, the web site says they’ll ship that soup direct to your door.
Mmm, mmm good!

Jestine’s Kitchen
251 Meeting St.
(843) 722-7224
If I had the time I would slowly eat my way through their menu.
Jestine’s Kitchen is true southern home cooking.  True soul food.
Our waitress was the greatest.
I can’t remember her name but you’ll know her by her attitude and sass. If you see her, say “hello”.
But don’t make her mad. 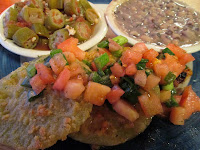 Refrigerator pickles awaited us at our table. Our sides included sweet mashed potatoes and black eyed peas. For our main entree we had the fried chicken which is their house specialty.
Crispy crust, hot and tasty.  Large serving, too.
The fried okra was superb.
The fried green tomatoes with sweet pepper relish were incredible.
You may have noticed a pattern in my use of the word, “fried”. 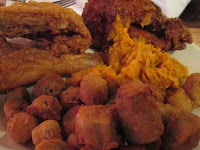 The sweet tea was perfectly sweetened. Served in a generous container, I drained it and had a second. Like crack in a glass. Their menu has a section for Greens where they say, “Salad with mixed baby greens and what got picked this morning”.  Love it. Leave room for dessert. They have a specialty that you will not want to miss. Jestine’s Coca Cola Cake.  Yes, they make it with cola.  Sweet, moist and richly chocolate.
It’s the real thing.

Dunkin' Donuts
Friends have raved about these coffee shops for years.
Visited my first one in Charleston. Now I'm a raver.
I ordered a cup of their freshly brewed coffee. But here's the difference. They add the cream and sugar for you.
Real cream.
And just the right amount of sweet.  I’d be a regular if there was one nearby.
By the way, DD now offers a breakfast sandwich featuring bacon and eggs on a glazed donut.
Dunk that in your cup!


So if you ever find yourself in Charleston, enjoy yourself.
Do a little time traveling.
But remember, when it comes to good eating, there’s no time like the present.
Now go explore.

Posted by mangiawithmario at 8:56 PM

All looks so delicious! A nice voyage!

Hi Mario, great blog! I just responded on my blog under your comment on my Overnight Waffles. Look forward to following along and hope you do the same! Ciao, Christina

I got to "time travel" to Venice a few years ago, and had the most amazing pizza and pasta EVAH!


We bumped into your blog and we really liked it.
We would like to add it to the Petitchef.com.

We would be delighted if you could add your blog to Petitchef so that our users can, as us,
enjoy your recipes.

Petitchef is a french based Cooking recipes Portal. Several hundred Blogs are already members
and benefit from their exposure on Petitchef.com.

To add your site to the Petitchef family you can use http://en.petitchef.com/?obj=front&action=site_ajout_form or just go to Petitchef.com and click on "Add your site"

Thanks for the marvelous posting! I quite enjoyed
reading it, you could be a great author.I will always
bookmark your blog and will eventually come back very soon.
I want to encourage you to definitely continue your great posts,
have a nice afternoon!

All of that food sounds delicious! I've always heard that Charleston is a great place for foodies. :D

Very Nice..!1 I loved this blog..!
Spanglish here too.! lol Hugs and Kisses..