“Vegetables are a must on a diet. I suggest carrot cake, zucchini bread and pumpkin pie” -Jim Davis 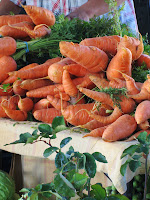 You've got to love a farmers’ market.
It’s a community built around food; a place to buy fresh produce from local farmers, a place to find artisan cheeses and extraordinary breads.  Most importantly they can be a place for friends to meet and neighbors to forge new relationships.
But hey, I've got a trivia question for you.
Do you know where the very first farmer’s market was in the state of California?
Go ahead and take a guess. But you might be surprised at the answer.
Give up? 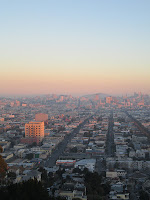 San Francisco.
Yup, San Francisco was where the State’s very first farmers’ market was founded on August 12, 1943. The Alemany Farmers’ Market was established as a wartime measure to provide an outlet for local farmers’ crops. This along a larger effort nationwide to reduce the pressure on the public food supply by starting victory gardens on public and private lands.
In fact, San Francisco’s Golden Gate Park alone held over 800 such food gardens during the era. 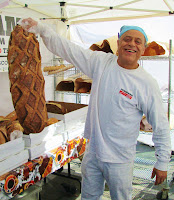 But let’s jump back to 2013. My wife and I recently visited the Alemany Farmers’ Market.  What a cool place with it’s’ range of foods and produce. One of my favorite things is to meet the people and personalities on any of our travel adventures. At the Alemany you’ll find no larger personality than Ralph Alves. Ralph is part of the team at Panorama Wholesale Bakery that brings quality breads to your table. Ralph is like the unofficial mayor of the market.  He seems to know everybody and if he doesn’t know you, give him a chance.  He will. With his warm smile and generous attitude, Ralph captures the heart of what makes the Alemany Farmers’ Market grand.  But let’s get to the bread. 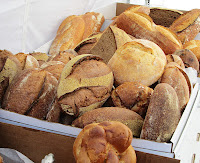 We had a Blue Cheese Walnut Sourdough Boule.  “Boule” is French for “ball” which describes the shape of the bread loaf. What incredible bread. Baked in stone hearth ovens, the blue cheese was subtle which complimented the flavor without dominating. The crust (my favorite) was hearty and the crumb was flavorful. I’m anxious to try their other loaves.

Their cinnamon twists were good, too. Really good.  We had more than one. Won’t say how many. But in two words; they were decadent and delicious. 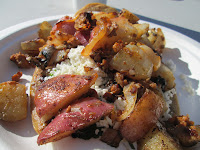 For lunch we ate at the “El Huarache” booth.  Que rico! We shared their signature dish, the “Huarache”. It's an oval shaped tortilla filled with beans and lightly fried. Topped with sour cream, cheese, cilantro, onions and salsa this dish was buried under potatoes and chorizo.
How do you say ‘yum’ in Spanish?
They also serve a Mexican coffee which is flavored with cinnamon and peloncillo, which is a Mexican brown sugar. Add a little cream and you will know coffee like you have never known it before. 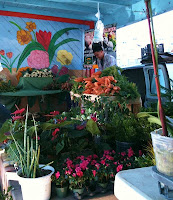 San Francisco is a city with a million stories to tell.  The Alemany Farmers’ Market is just one of them.

The Alemany Farmers’ Market is open every Saturday.  Dusk to dawn they say, though I’ll just take them at their word.  They are located at 100 Alemany Boulevard.
And here’s a truly un-San Franciscan treat; there’s ample free parking.

Posted by mangiawithmario at 9:35 PM

haven't been commenting on your blog for abit now :) just dropping by to say what an interesting post!
i do wish my country has a farmer's market, sounds so quaint! :)

Sounds like a heart-warming place Mario. Good for body AND soul.

Hi Nicole, thanks for the visit. Yes, farmer's markets are pretty awesome. Hope you are doing well. Adieu to you, too!

Hi Anna. So good to hear from you. Heart warming places for the soul and body they are. And best enjoyed in the company of good friends and loved ones.

This baker is a peace of bread.