Around the World in 49 Miles

“I love to travel but I hate to arrive” - Albert Einstein


“If you're afraid of butter, use cream.” - Julia Child

I have a question for you.
Let’s play pretend for just a bit. If you could go to any three places in the world, where would you go? Travel and accommodations all paid for. That’s right, let’s say I found you the money to go. Okay, that’s the pretend part.
So where would you go? Italy? Nepal? Asia? Stay domestic?
Just in case your travel plans are a bit delayed, I want to tell you about a 49 square mile area here in northern California where you can experience the culture, language and cuisine of countries from all over the world.
San Francisco.

The City by the Bay is home to about 112 different spoken languages and as such home to a diversity of culture and cuisine that can give you a sense of travel all while chillaxing in a limited area. San Francisco has long been a place where creative genius has found expression across a range of venues. Consider Santana, the Grateful Dead and Journey.  You can’t forget the Golden Gate Bridge, cable cars and Lombard Street. Then there’s the fortune cookie, sour dough bread, Ghirardelli chocolate and the Mission burrito.

In my next series of posts I’m going to share some of the City’s hot spots for food and fare. Some are destination spots and some are neighborhood favorites. All of them are places where people have converted their dreams into reality through creative genius, hard work and a little luck. So join me as we go explore and travel around the world in 49 square miles.

First stop: Mitchell's Ice Cream
I've always supported the idea of starting dinner with dessert. And Mitchell's ice cream is the dessert to start it with. I think I know why; 16% butterfat.
Established in 1953, Mitchell's is a family owned business located in San Francisco's Mission district. Their story starts in 1865 when the Mitchell family moved to San Francisco to start a dairy farm. Later in 1913, Mrs. Mitchell had an apartment building built which would face demolition in 1947 when the City of San Francisco  wanted to make room for street expansion. The Mitchell family fought the plans and miracle of miracles, the City agreed to jack the building up and turn it sideways to fit the expoansion plans. Yes, miracles have happened.  Then in 1952, two Mitchell brothers chose to use an empty storeroom to make their dream come true.  They opened an icream shop and now you know the rest of their story.
After all these years they have always had only the one shop. And they still hand make their ice cream fresh in the shop almost every day. Mango is their crowd favorit. Mexican Chocolate is my newly discovered flavor.  But the best I've tried so far is Caramel Praline. Yum and double yum.
And did I mention the 16% butterfat? 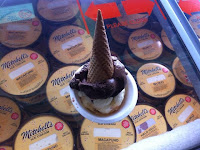 Posted by mangiawithmario at 7:18 AM

Funnily enough, San Francisco would be 1 of my 3 places to visit!
When do I leave...?
Janie x
PS thanks for popping by and saying Hi!
PPS I love your Tolkien quote :)

Just returned from California, though I didn't see many places, but I want to see the pyramids. Egypt. A camel ride.

Dave,the espresso toffee is worth a return visit, dontcga think?

Jane, thanks for the visit. If you do make it this way, be advised that San Francisco has so many things to see and do that it is like 3 destinations all by itself. I love the Tolkien quote, too.

Peaches, thatnks for the comment. Egypt sounds like an awesome place to visit. Layers of history, both ancient and new. But it sounds like you may need another California visit for those things you didn't get to see.

Just returned from California, though I didn't see many places, but I want to see the pyramids. Egypt. A camel ride.

Hello Mario, thanks for your visit and your opinion in my blog. good look for you!

Hi Mario, how are you?

I would like make a travel around the world one day!!