The greatest thing you'll ever learn is just to love and be loved in return.- Moulin Rouge 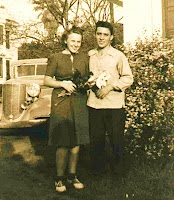 He was a dollop of Azorean. She was a pinch of salt with a sprinkling of Spice from all over.
Most days, they drove each other nuts. But some days they were just nuts about each other. That’s was their Recipe.
His name was Louie; hers was Patricia.
They met in High School. He was finishing his sophomore year when she came by with her sister to tour the high school that Patricia would be attending in the fall as a freshman.
The Portuguese Dairyman’s son meets Pretty Young Thing.
Something ignited that day.
Together they would mix a batch of life that included marriage and eight children. They would face the challenge of a World War that trekked Louis to the beaches of Normandy.
And they would live to see enough grandchildren to form two football teams.
Life came in large portions for them.

When I first met him I was every father’s nightmare. He had a daughter I was dating and he had every reason to run me out of town; but he didn’t. His daughter and I married and over time I came to enjoy a rich menu of life and foods that he and Pat produced. Louis’ Portuguese Azorean heritage flavored their kitchen, while Pat’s hands made meals that were a precursor to California cuisine. Together they formed a kind of a Cal Azorean Kitchen.

Two staples of our large family get togethers were Pat’s Macaroni Salad and Louis’ Beans; particularly good when eaten together. This macaroni salad is bomb! I have trouble enjoying other macaroni salads now because Pat’s has set a standard of flavor for me. What can I say? Louis came to call Pat’s macaroni salad “Johnson’s Floor Wax” Salad. Louis had arranged a family picnic. Maybe 50 people or so. He and Pat made big preparations with the food. She worked hard to have things just right and had made a large batch of her famous macaroni salad. On the morning of the picnic she pulled the salad out of the refrigerator when it slipped out of her hands and onto the floor. All over. She was sick to her stomach. You can imagine. Louis heard the commotion and came in to see his distraught wife and quickly formed a solution.
They would simply scoop it all back into the bowl and tell no one.

That day at the picnic we all laughed, talked and played. We had a rousing game of tackle football. Louis was well over 60 years old and tearing up the field like a youngster. That is until one of his sons took him out with a linebacker tackle. I think that was our last family football game.
And oh yeah, did I tell you we ate? Great food; including Louis Beans and Pat’s Macaroni Salad. Who would have known? 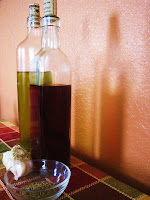 So here are the two recipes. I omitted the floor wax on the one. You can add it if you’d like.
I find that those who have passed on, those whom we have loved hold a place in our lives that carry across generations. They live on in our memories, in our traditions and in the way that we look at our world.
Sometimes they live on through the recipes of our lives.
Happy Valentine’s Day, Pat and Louis.
Happy Valentine’s Day, all.

Posted by mangiawithmario at 11:41 AM

I love it when a recipe (or 2 )have stories behind them, and remind you of good times!I'll make both, to celebrate the end of my exams!Thanks for sharing and thanks to Pat and Louis for creating them!
Happy weekend!

Very interesting the story! And the food must be delicious!

Hi Mario! Thanks for your words, but I must tell you that not all photos are mine ... but anyway, I'm glad you like them. A greeting from Spain

This blog is nice!

Funny I made mom's mac salad last night for today's superbowl chili cheese dogs... great writing i enjoy your blog.and the secret is the olive oil and vinegar.. just remember to marinade the noodles in it before adding other ingredients.. you did forget salt and pepper to taste.. Faith

Hello!
That phrase pretty Mouline Rouge and appropriate for Valentine!

Ciao Mario,
This is a wonderful story! It kind of makes me wish I could have the original version - floor wax and all! Thanks for all always making your findings a delightful read.

Thanks for sharing Mario! life is great in Mexico, you guys should come visit ;) Happy early Valentine's

Hi Mario!m
I'm Cinzia, from "essence in kitchen", thaks for your visit and your gentle mail :) I'm very happy to have a follower from California!
"see" you soon, Mario :)

Hi Mario, here I am reading all your amazing post.. and I tink this recipe could be a good fresh summer food. Good, very good!
My english isn't so good, I studied it al lot of years ago, attending secondary and high-school.. so far from now!
Ciao!!

hi! here I am!
nice blog and easy writing! I like it!
Bye

Hello Mario, thanks for stopping by my blog.
sorry for my bad English. I understand almost todo.He used the translator.
I'm following you, to come here more times, so I practice my English. Greetings

hello! happy heart's day to you and to your wife Ellen! :) (not yet too late hahaha)

have a nice day!

Mario, thanks for dropping by.
I love reading this; the story behind the valuable recipes :)

Mario, thanks for being my first follower and for the comment. Give me like a week or so to start posting more simple recipes. It's a mix of recipes i find to be easy and simple and some of my own that my mother pass along to me.

Oh, Mario, this is so beautiful! I just came to say hi because you wrote a comment for my Blog "Espérame en Siberia" and now I just wanna stay longer to read more and more about your recipes. I have to admit that, when I was a little bit younger, I used to cook a lot more than now and even wanted to become a chef.
I enjoy VERY MUCH baking some cakes when it's a stormy day, I really don't know why.

You don't have to apologize about your spanish, I understand sometimes the language is a big barier, but we can work this out. I'd love practicing my english too, so...
Of course I'm gonna follow you and your Blog. Congrats! It's a wonderful website.

Send you a big hug and my best wishes from Mexico City.

I enjoyed reading your post very much. Recipes with sentimental backgrounds make them even more wonderful.
I never really cared so much for cumin, but over time I really learned to appreciate it more. My mom cooks with it all the time and now it is one of my favorite spices.
The macaroni salad sounds wonderful also, especially with the pimentos. Love pimentos!

Memories are our most precious treasure...no one can ever take them or replace them. Wonderful recipe..look forward to reading more. Blessings, Catherine

Ciao Mario!
I was already here on your blog when I read your mail, and it's interesting that is not only a recipe blog, like mine: if you have read the italian text in my posts (in english I write only the recipe), I try to tell a story about the food I am describing.
See you soon on your blog.. or on mine!

Loved you story! Loved your recipe! I like the stories in each post! :) And i got a question! where are you from?!

Delightful to read about your family and to learn a good bean recipe! I'm about to embark on a low carb diet as a challenge and could use all the help I can get!

I Loved!!! thanks for your visit!!! Sorry for my english!!! kisses

I love your stories! Recipes are always best when there is a history and story behind it.

Hi Mario, I really love the story telling --what great writing! Great recipes too. I will definitely be reading more of your blogs! Thanks for inviting me to see your blog. Ramona from "Curry and Comfort".