Florence, Gelato and a Teenage Girl 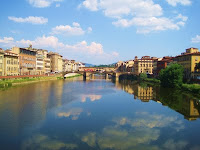 Ah, Florence.
Firenze to the Italians. The birthplace of the Renaissance. Home to Galileo, Da Vinci and Michelangelo. Considered one of the most beautiful cities in the world. We strolled the historic streets, sat at the Piazza Vechio, toured the Galleria and gawked at Michelangelo’s incredible 17 foot statue of David. Very big, very naked.

A curious mix of the old and new, this Florence. You can shop at the Disney store in its historic section. Or order a beer at McDonalds. Kind of like a McBrew with your Big Mac. And there is one more thing to mention about this city. It's where Gelato was said to have been invented.

Story goes that there was these two guys. They are not sure who exactly was responsible, but either one of them puts the origins in Florence. Seems that there was this ruling and powerful royal family in Florence whose name was Medici. Some in the family put together a food contest in the 1500's. Theme was to find "the most peculiar dish ever seen". A guy named Guiseppe Ruggeri who sold chickens for a living decided to enter. His entry was a sorbetto that won and came to the notice of a 14 year old named Caterina de’ Medici. She was about to ship off to France to marry a Duke, soon to be King Henry. After eating that sorbetto, she let Guiseppe know that he would be joining her cooking staff in France.
Hey, who can say "no" to a teenage girl with a sweet tooth?
The second guy was Bernardo Buontalenti, a native of Florence who was appointed by a different Medici to supervise one of their banquets. He surprised everyone by showing up with a cold cream dessert churned over salt and ice. It was made with milk, honey, egg yolk and a sprinkling of wine. Big hit. That one was a keeper. So, Florence gets some street “cred” for being the home of Gelato. 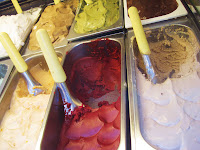 Gelato Highlights
Rome
Gelateria Ciniolo (located in the Piazza di Spagna, Due Macelli 29)
This was fun. While in Rome, we met and became friends with Antonio. He is a 6' 5" Carabinieri. That's the National Police, y'all. We made arrangements to hang on one of the days. We walked around with him talking and sightseeing. Very warm day so he took us to his favorite Gelateria. I had already been sampling the gelato sites of Rome but had not tried this one yet. Incredible. I had the cioccolata fondente on a cone. Dark chocolate. Cold, refreshing and bursting with rich chocolate flavor. My taste buds were in heaven.
I made a mess with the cone, but enjoyed myself in the process. It was the first of a few messes.

Perugia
Il Gelato di Mastro Cianuri
We visited friends that live in Perugia. Before we got there, we were promised some of the best gelato we would find in that city. It turned out to be the best we had while in Italy. You get a choice of three scoops on a cone or in a cup.
I had the cone and again made a mess. How does chocolate get everywhere?
I cannot remember the names of the flavors I had except of course the chocolate scoop. The flavors were each so distinct and intense. The gelato was velvety. My taste buds were ecstatic. Every single one of them. The gelato just glided across my mouth. Then as the flavors began to blend into one, they united to form something new. Simply wonderful. This place gets my "Gelato Buonissimo" award. It’s the best. And they have their own Facebook page. Check them out.

Florence
Cafe Calimala Gelateria
Hot days in the city. So we just had to eat a lot of gelato. We didn't have bad gelato anywhere, but this place had some that was pretty good. Colorful atmosphere. Simple, but tasty. Three scoops. Can't remember the name of any except the one that was chocolate. Me and chocolate have this thing you know.
And by the way, I made a mess. Again. 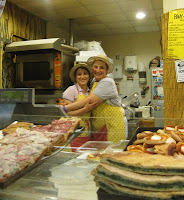 Pany da Lory
Fresh artesian breads. Baking is an art form here. And it’s all typical Tuscan products. But the best part is the two ladies running the place. Fun, lively and they like taking pictures. They are in the Mercato Centrale San Lorenzo. If you make it to Florence, stop by this Market. A ton of different business. Hot to order food. Fresh fruit and vegetables. Cheeses, meats and wines.
And skinned chickens with their little heads and necks still attached waiting to be taken home and roasted.
Bar Massimo
We ate all over Florence. All of the places we ate were really spots that enjoyed tourist traffic. All good. But our last night there, we stayed at a hotel not too far from the airport. We had some free time so we wandered around in the neighborhood. We like getting lost locally when traveling abroad. It's about neighborhood "flavor". I speak enough of the language so we were okay. We wandered about the neighborhood where real people live, work and eat. And that's when we hit a jackpot. A small family restaurant run by Massimo, his wife and their daughter Chiara. The place was bustling with a lunchtime crowd. Lot's of platter clatter and people chatter. And all in Italian. No English on the menu. Mama Massimo was in the kitchen doing her magic. I had her spaghetti with ragu sauce. Simple tomato and meat sauce. Plus whatever else she seasons with. Amazing. My wife had a tuna salad with cheese and an Italian dressing. Our best meal in Florence. They have a Facebook page. Check them out. Their family is awesome. They gifted us with a bottle of wine when we left. Thank you Massimo and Chiara.
There you have it. Florence in 2000 words. Or more. If you and I ever get a chance to hang in Italy together, let's grab a gelato. It'll be my treat.
And I promise to try and not make a mess.
Posted by mangiawithmario at 8:57 PM

Mario you have done a great job of documenting our trip. Love you and so proud of you. elena

Florence is beautiful, I went there about 15 years ago, I wish I could go back one day. This year Rome is on the schedule. ;) I have to say, Italian ice-cream is fab.

Great post! I'm hoping to get to Florence next summer! :D

I love Florence too - and ALL Italian food. Loved your write-up.
Kind regards,
Shirley I.

wow! you went to the place where there are lots of Gelato! Geeezz! :) great post you have there :) Thinking to eat gelato hahaa! :)

How are you Mario? have a good day!

I L O V E gelato! I love your post! You make me wanna sell my stuff and buy a ticket to go and make a mess myself with cones and gelatos in Florence!

Hi Mario! Looks like you had a great trip. I didn't had the chance to vistit Florance yet, but we did went to Rome...and you are right...Italian gelato is the best! So tasty!

Paris is great...especially when everything is paid for! Did you had the chance to vistit an open air market? I love markets...can hang out there all day.

Hey maybe one day Holland will be on your to go list. Make sure you contact me then!

...and knowwhat? those little trivias you shared in every posts here makes me a thousand more "informed", historically and geographically.

thanks for all the entertaining posts and stories.keep up the adventures:)

Italy is amazing! Haven't been to Florence yet, but I'm sure I would visit Florence one day.

how are you doing?

At least some bloggers can still write. Thanks for this blog...