Michael Jackson.
And Elvis Presley.
And Bruno Mars and me.
Oh and Magnum PI, too.
Do you know what we have all had in common?
Well it’s not dancing and it’s not singing
Yeah, I’ve heard that Tom Selleck sing.
No, what we have in common is that at one time or another we have all come under the spell of the Hawaiian island of Oahu. Waikiki, North shore. Hanauma Bay. Emerald seas. Diamond Head. Yes, Oahu is truly a land of enchantment.


Known as “The Gathering Place”, Oahu plays host to some 5 million tourists every year. And this year my wife and I had the pleasure of being part of that assembly of people enjoying some island charm. My wife and I went to celebrate our anniversary and were joined by our family, 17 in all. Almost two weeks experiencing the big city of Honolulu and the beauty of the North Shore. Together we enjoyed some great times, great ocean fun and of course some great food.
So let’s talk food.

Let's start with Shave Ice
Story goes that this treat came with Japanese workers who immigrated to the Hawaiian Islands and brought this traditional dessert where they would shave ice from large blocks of ice using Japanese swords.
Very cool.

Though you won’t see swords a swinging anymore, this dessert is still made by shaving a block of ice rather than using the crushed ice as they do here in the mainland. The fine, snow like ice absorbs the syrups making a taste sensation that will have you craving for more.
And I encourage you to do so.

Matsumoto’s in Haleiwa makes their syrups on premises. Bikini Beach Cafe hit the right spot on a hot day in Honolulu. And the Old Sugar Mill in Waialua has natural flavors to add to their mix. You can find local flavorings like guava, strawberry, pineapple, coconut cream and lychee.
I don’t know if it’s possible to buy a bad shave ice. These three are the ones we had a chance to visit and they were great.
Oh, if you like you can order your shave ice cones with vanilla ice cream which is scooped into the bottom. Or you can get it with sweetened condensed milk drizzled over the top.
Several of us did so. Several times.

Now Let’s Talk Spam
Can you keep a secret? Just between you and me.
I like Spam
But I go a little incognito shopping for it in my hometown. You know sunglasses, hat, and fake mustache. But in Hawaii, you can come out of the tin and go public! In fact besides Hawaii, Spam is a staple across the Pacific. For example it is estimated on average each person on Guam consumes about 16 tins of Spam per year with Hawaii close behind. The residents of the state of Hawaii consume the most Spam per capita in the United States.

Sometimes called Hawaiian Steak, Spam was first introduced during the Second World War when fresh meat was difficult to get to soldiers on the front. Soldiers then referred to Spam as Special Army Meat. Surplus in supplies led to an integration of the pork shoulder meat into local diets.


In Hawaii, Burger King and McDonalds restaurants each feature spam dishes on their menu. I had a breakfast Spam biscuit at the Golden Arches. And there is a larger Spam breakfast offered that came with rice. At a local café I had fried Spam with 2 eggs over medium and toast. Haute cuisine, my friends. So when in Oahu, don’t be afraid to try a Spam dish. You're on vacation, think inside the tin.

And now the Ahi Poke Nachos
This was one of the great dishes we had while we were in Oahu and we had it at the Moana Surfrider Hotel. Also known as the First Lady of Waikiki, the Moana Surfrider is a famous historic hotel on the island of Oahu.
Built in the late 1800’s as the first hotel in Waikiki, the Moana opened its doors to guests in 1901. The first guests were a group of Shriners who paid $1.50 per night for their rooms.
Try finding coffee in Waikiki for that price today.

We went on the recommendation of a friend to sip mai tais at the hotel’s beachside restaurant. We did and accidentally discovered their Ahi Poke Nachos. Never having tried one before and feeling a bit adventurous after seeing it on the menu we decided to dive into one. Their dish is served as a pupu or appetizer but was large enough to feed both my wife and I as a meal. In a word, they were spectacufabulous. My taste buds were doing a luau, they were so happy.


The Ahi Poke Nachos are made with fresh island Ahi, avocado, Maui onions, bonito flakes, nori and generously dressed on top with sriracha aioli and sweet kabayaki. All on a bed of house made fried wonton chips.
Must have. Must eat. Must go.

And on to Shrimp Trucks
Shrimp is my one weakness. The North shore in Ohau happens to be loaded with food trucks with shrimp being the predominant dish offered.


The icon of all Oahu’s food trucks is Giovanni’s Shrimp Truck. Being one of the oldest and most written about trucks, it certainly gets a lot of hype. So for visitors from around the world coming to the island, it is practically tradition to make the pilgrimage and do honors. You’ll spot the Giovanni’s truck right off. The white truck is graffitied up by fans from near and distant lands who came prepared with sharpies in hand.

Their signature dish is the garlic shrimp. Lotsa butter. Lotsa garlic. Lotsa large shrimp. What’s not to love? Keep in mind they are in shell so expect a messy meal. But this is one savory dish. Giovanni’s also serves a lemon butter shrimp and a hot and spicy shrimp dish that comes with a no refund guarantee if you find it too hot.. Giovanni’s is very good, but not bomb. You have to go because it is an icon and you don’t want to miss an experience. But don’t miss out on what the other north shore trucks have to offer because there’s plenty. 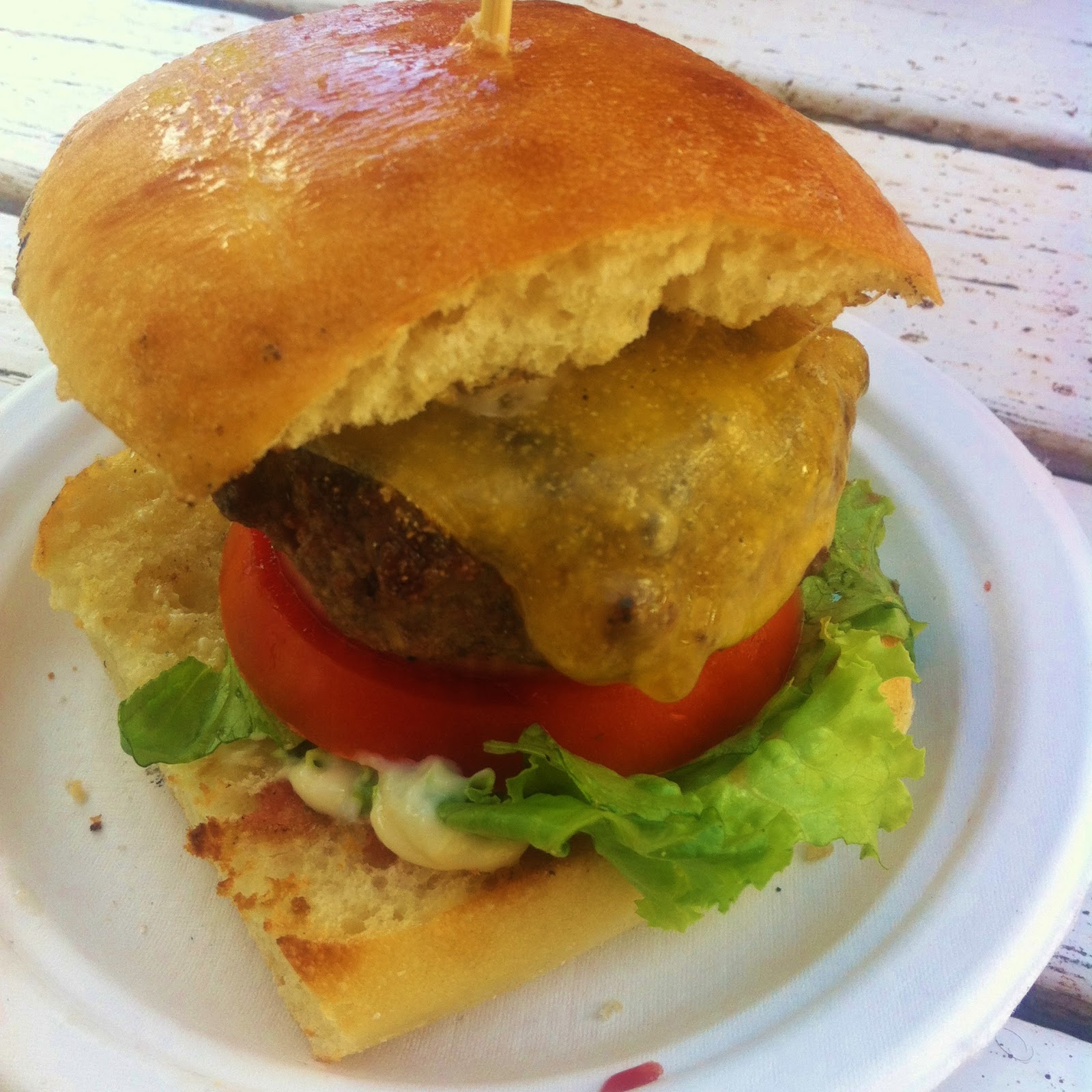 We enjoyed other truck fare from vendors parked alongside Giovanni’s who are all located on Kamehameha Highway in Haleiwa. Other truck fare we enjoyed included hamburgers at VJ’s Dogs and Burgers. They are genuine Maui grass fed beef and these burgers were bomb. We had a short wait while it was prepared but it was worth the wait. Say to hi to Sara. She rounds out the dining experience with great customer service. Then on to Zane's Simply Shrimp where we enjoyed the coconut shrimp and fish and chips. They came in tasty, generous portions, but a bit on the oily side. And there was the ahi poke at the Okina Café that my daughter ordered. Simply wonderful! We worked our way through all these truck vendors. Then we started over and did it all again.


The next time you’re in Oahu, stop by. And don’t forget the sharpie.

Ted's Chocolate Haupia Cream Pie
I’m a pie guy. I’m a chocolate guy. And now I’m a haupia guy.
Ted gets a standing O for bringing these flavors together into what is one GREAT pie. Haupia is a coconut milk based creamy dessert that is actually a stiff pudding. Ted’s flaky, buttery crust is filled with a layer of rich, smooth dark chocolate custard cream, then filled with another layer of haupia topped with whipped cream. Oh yum! We were recommended to try this pie while on the island and with all our business we almost missed it. But an alert daughter saw them and brought back a couple of pies for all to enjoy. Again, thank you daughter. Somebody raised you right.
You can find Ted's Pies at their restaurant or at select area markets.


They make a great dessert. An even greater main course. I even had a slice for breakfast.

Oahu
The island is called paradise and indeed it was for us. We ate like Hawaiian kings and queens. We surfed its ocean curls. We swam with turtles. Snorkeled and hiked Manoa Falls. We were mesmerized by a lightning storm. And we were held in awe watching the sun draw it's day to an end over the Pacific. With all the laughter and fun and activities, in the end Hawaii was about making connections. Making connections with the ones we love in mind and heart and soul. Weaving the threads that bind us to one another and strengthening what we mean to each other. This can and should happen wherever we live and are. For us, we had the pleasure of Oahu being part of that experience.
Aloha

Posted by mangiawithmario at 12:21 PM

What a great post Mario! Your descriptions make me want to try all the foods that you shared. They look (and sound) so yummy :)
Thank so much, I will refer back to this post when my family goes back to Hawaii!
Thanks!

Hi Marcy and thanks for the great comments. You know, I can clear my schedule and be available as a culinary guide to the island of Oahu for your family. Ha ha. I know you guys will have a great time

Hi Mario thank you very much for visiting again, I loved your post, I know that island and think I can get to go there someday have loved to discover the fantastic post you've done.
Greetings and happy Sunday.

Hi Nenalinda, I hope you get a chance to get there soon and enjoy the unique experiences and food and ocean swimming that Oahu has to offer.

Hi Mario! What a pleasure to meet you :) I've read your comment on my italian food blog (with a great delay) and I thought it would be nice to come and peek a booh :)
One of my life loves is travelling and for sure I'll be in Hawaii someday!
Lets keep in touch and if you try one of my italian recipes I'll be pleased to publish your pictures!
<3

Ciao Miss Mou and thank you so much for your visit. And yes, absolutely. If you love to travel then one day you must include Hawaii, Again, grazie!

Your blog is impressive, thanks to the quality of your recipes & other content. We would be glad if you would participate on Contestchef so that your quality recipes can contest with other such bloggers/ recipe creators and win accolades from various players in the global food industry.

Contestchef is a global forum for food/ recipe bloggers to showcase their skills to the world. This is a one of a kind concept and backed by food conglomerates around the world. Several recipe creators/bloggers are already contesting on Contestchef.
Click to join Contestchef
Sincerely,
Nandy
Contestchef

This is such a nice addition thanks!!!
غلا الروح
شات صوتي