“Ask not what you can do for your country. Ask what’s for lunch.”
-Orson Welles

Dio mio!
I hope you’re sitting down.  Because guess what? After a long hiatus I am back.
I trust that all has been well with your lives and that you have enjoyed many days of exciting adventures. I know that we have. During my time gone, we have had weddings, birthdays, SF Giant’s ball games, beach camping and general all around living. All punctuated of course with fine foods and delicious dining. So thank you for your patience and readership.
I’m going to share with you a delightful weekend my wife and I spent that included a pleasant outing out and about our City by the Bay, breakfasting some seasonal fare and a unique breakfast cookie.

The Pleasant Outing Out and About.
Did you know that San Francisco has an official flower?
Say hello to my little friend, the Dahlia.
The Dahlia Society of California hosts an annual Dahlia Flower Show in San Francisco at the Golden Gate Park’s Hall of Flowers. This was our first outing to a Dahlia show and much like a butterfly bouncing about in a garden on a spring day we moved from flower to flower in enjoyment.   For any visitor, it would be hard not to be amazed at the rich showcase of color combinations and petal arrangements.
In October of 1926 then Mayor Rolph and the SF Board of Supervisors adopted a resolution that designated the Dahlia as the official flower of San Francisco.
And they couldn’t have picked a better flower to represent the cosmopolitan character of the City of San Francisco. The Dahlia’s history began in Mexico and in the early years of its discovery the Dahlia’s seeds traveled by explorers to Spain, France, Italy, Germany and England. These founding seeds gave rise to a diversity of beautiful hybrids.
Truly a cosmopolitan flower. 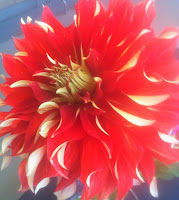 Okay, so here’s the food tie in with the Dahlia. This is after all a food blog. Originally the Dahlia was harvested by the Aztecs for medicine and food. The Aztecs used the tubers in their diets by eating the bulbous roots. Sounds like a lot of fiber to me. Growers today say that the bulb can be substituted for potatoes. Scalloped dahlia tubers?  French fried Dahlias? Tubers au gratin? Efforts were made in those early days to introduce the tubers as a new food choice in Europe, however these attempts were unsuccessful.
Some things you just have to acquire a taste for.

A Seasonal Fare
There’s nothing quite like a California peach.  It is one of our summer treasures here. But did you know? Peaches originated in China and have been cultivated as far back as 1000 B.C. From there peaches made their way west to Persia and there were discovered by Alexander the Great. Remember that guy? Alex the original G introduced the peach to the Greeks where it was a big hit. By about 50 B.C the peach had made it’s way to the Roman Empire where it was grown and sold at market. The Romans called the peach a Persian apple, and the name for peach in numerous languages to this day is the name for Persia. 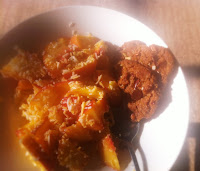 There are so many great peach recipes but one simple dish that my wife makes that I love is her sliced peaches. She takes nice ripe yellow peaches and slices them into a bowl, sprinkles them with sugar and then shreds cheddar cheese over them. Simply scrumptious. We have a favorite room in the house that gets the morning sun where we will sit with coffee and sometimes eat breakfast. A perfect ambiance for enjoying this seasonal fare.

Variations are only limited by imagination but for us have included yogurt, cottage cheese, granola or Mitchell’s ice cream.
I’ve eaten this refreshing dish for breakfast. Lunch. Dinner.
Oh and of course, dessert. 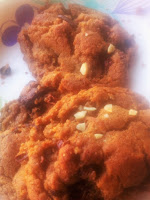 A Unique Breakfast Cookie
I have had chocolate cake in the morning. Popcorn for dinner. And waffles for lunch. So I have no problem squeezing in the right cookie for breakfast. Especially this cookie.  Our daughter shared the recipe with my wife who made a batch of these almond butter cookies. My wife likes referring to these cookies as flourless as opposed to gluten free because gluten free implies that something is missing to her.  However, there is nothing missing in flavor or texture with these flourless almond butter cookies. We did not have all the ingredients called for so as with all good quarterbacks, she made an audible at the line and substituted a few things in the recipe. She added chocolate nibs to the chocolate chips we had and used coconut sugar since she was out of the brown. The evening she made them I ate three and more fresh out of the oven.   The next morning we discovered they made a marvelous addition to the sliced peaches
Simply marvelous. 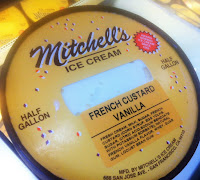 1. Preheat the oven to 350 degrees. Line your baking sheet with parchment paper. Set aside.
2. Mix the almond butter and sugar together until creamy and smooth. Add in the egg and vanilla extract. Mix until well combined.
3. Stir in the baking soda, salt and chocolate chips.
4. Shape dough into balls, about 1 tablespoon of dough for each cookie. The dough may be a bit crumbly, but just squeeze it together. Place dough balls on the baking sheet, about 2 inches apart. Sprinkle with sea salt.
5. Bake cookies for 8-10 minutes, (until cookies start to brown at the edges). Let the cookies sit on the baking sheet for 2-3 minutes. Transfer to a wire rack and cool.

All right my friends.
It’s been great hanging with you. Now go out and discover your own delightful weekend.
Ciao!
Posted by mangiawithmario at 10:18 PM