"Part of the secret of a success in life is to eat what you like and let the food fight it out inside."-Mark Twain 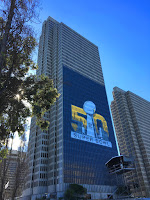 It’s San Francisco.  And in case you missed it, there’s a football game that’s going to be played here.
Super Bowl 50 to be exact.

There are many things to enjoy here in our City; the sights, the bridges, the ocean, the multiplicity of cultures.  And of course there’s the food. You could probably eat out every night of the week your whole life and not exhaust your opportunities to dine.  With so many choices it would be easy to miss some great places to eat.  There’s a wonderful restaurant I’d like to share with you so that you don’t miss out.  I think you’ll find that whether you are a visitor or a local, a trip here for lunch or dinner will be worth your while. 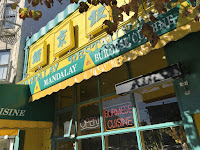 The Mandalay SF
The Mandalay SF is the first Burmese restaurant to have opened in San Francisco. They did so in 1984 and brought to this City a new cuisine experience.  Burmese cuisine itself is a rich blend of influences that include Indian, Thai and Chinese.  Add to that the family’s own style and preparation and you have the Mandalay SF.  Thanks to a friend and co-worker who had been here before we were able to make the Mandalay part of our repertoire of eating experiences. 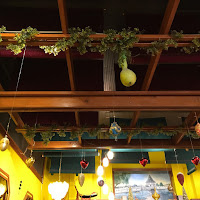 Décor
I’ve never been to Myanmar. So I’ll just say that the vibe is great.  There are plenty of attention holding knick-knacks. But you’ve got to love a place that keeps Christmas decorations up year round. I asked one of the owners about this and he said it was too much one year to take them all down so they just left them up.  Marvelous! 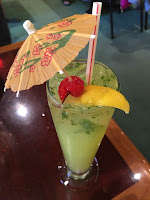 they wanted us back.  And we have been. Several times. They accommodated us with both gluten free and soy free requests.  One of the owners, Sherry Dung has stopped by our table every time we have been there to ensure efficient and personal service.  She has a great story about how she joined her family in the restaurant business here in SF.  If you both have the time, ask her about it.
By the way, don't forget to try the Mandalay Special Ginger Lemonade 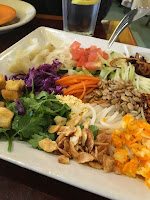 The Food
Rainbow salad
This salad is prepared with twenty ingredients and served with their special house dressing.  Don’t ask me to name them all. Instead look at the photo and see what you can identify.  We ordered it as an appetizer.  They brought it to our table and asked if they could toss it for us.  I think its called rainbow because of the array of colors that present in the dish.  But  it is also a rainbow array of textures and flavors.  We commented that we could go there just to enjoy that dish only and would be satisfied. Again, it’s great shared. 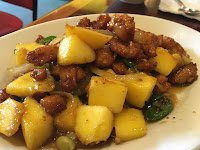 Combination Fried Rice
Rich and ample ingredients. If fried rice were a classic song the Mandalay would be said to do a cover that is all their own. Their coconut rice is also killer. 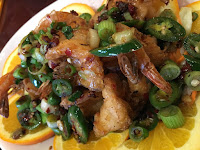 For us, the Mandalay brings brilliant layers of textures, colors and flavors. Our word for it: Exspicomfo.
That's pronounced Ex-spee-comfo.
Exotic, spicy and comforting.

San Francisco makes another touchdown at the Mandalay SF.

Mandalay is located in the Micro-hood known as the Inner Sunset at:
4348 California Street
San Francisco.

Posted by mangiawithmario at 6:36 PM

Ciao Mario! Bellissimo blog, complimenti! Your posts are so interesting. Thanks!

Hi Sophi, thanks for your encouragment