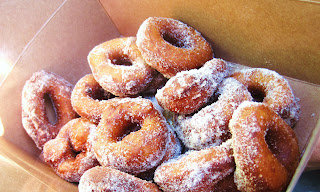 As a reader of my blog, there are probably two things you should know about me.
The first is that I like food. That’s no surprise; that’s the first thing.
And the second thing? I like food.

Okay, so that would explain why, even when I am on a mission I still have sudden thoughts about food. Case in point? My wife and I were driving on the 12 (Highway Twelve) just outside Napa heading towards Sacramento when nature called. You know Mother Nature; she’s a little impatient and doesn’t like to be kept waiting. So we pulled into the parking lot of the next convenient location to find a bathroom.
It happened to be the Boon Fly Café.
So after we entered the café and found what we were looking for I realized that I had this crazy craving for something sweet. Crazy. Has that ever happened to you? So I asked the Manager if she sold anything like pastries. And that’s when she uttered that one sweet word.
Donuts.
“Donuts? “ I responded, “That’s one of my favorite words in the English language.”

Who can resist that wonderful fried dough food?
Powdered, glazed, chocolate, sprinkled, raised, cake, sugared, cinnamon, crème filled, jelly filled, custard filled, twists, apple fritters, maple bars, buttermilk bars, chocolate bars, old fashion plain and one of my favorites; old fashion glazed. I think I’ve tried them all at least once. And I don’t mind if they are made with zero trans fat. Incidentally, the donuts of the early 1800’s were fried in hog fat. Mmm.

The Boon Fly Café is part of The Carneros Inn, a PlumpJack Resort located in the Napa Valley. Now what’s up with that PlumpJack name? Did they know that’s what we were going to all look like after we discovered their donuts? Even so, they make a lot of good food. Great food even. And I’ll be writing about some of their dishes later but for today let’s talk donuts.

The Boon Fly Café’s donuts are hot, tasty and made to order. The dough is made on the premises fresh each day. You order it and they will pop them into their fryer on demand. The mini doughnuts cost a dollar each but you can get the Boon Fly Baker's Dozen for $9.75. They’ll deliver it to your table in a charming little metal pail, or to go if you prefer. Without the pail, of course. The Boon Fly doughnuts come generously covered in cinnamon and sugar. And let me tell you; they are deeeelicious. My mouth waters as I write.
One note though, you should eat them when they are delivered because if they sit too long they will become less malleable.
Now my wife and I got our donuts to go. The café packed our Boon Fly dozen into a carton. You know what the bottom of that carton looked like after we finished those donuts? I had called first dibs and I was not disappointed.

You can call me PlumpJack if you please.

Email ThisBlogThis!Share to TwitterShare to FacebookShare to Pinterest
Labels: Doughnuts

You had me at deep fried

Sounds delicious and tempting. I love your writing style - I can hear your voice in my head as I read it. Lots of early morning coffee talk that I remember fondly.

thank you for your visit, it's loved....I was happy, because you liked my english....I think that english is a language very difficult. I study a lot in order to speak very well!! I know california (San Francisco) beatiful city. Where do you live? San Francisco or L.A?
bye...see you

I have a sudden craving for donuts now! I see you and I have something in common - we like food. :) Thank you for befriending on Foodbuzz.

Wonderful! I enjoyed reading and we'll be back for more... Thank you for your visit to my blog and the comment on my poem.